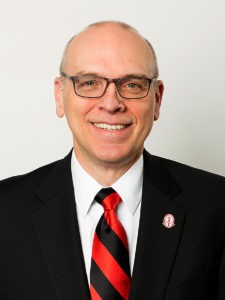 O’Gwynn, who begins his role May 1, brings more than 30 years of experience in the field.

“We are humbled by God’s Providence in leading us to invite Mr. O’Gwynn to join the North Greenville family.  He and Deborah will quickly become important members of our community and will bring their talents to bear in many ways,” President Gene C. Fant, Jr. said. “I believe that God has prepared him for just this position and we look forward to seeing how God will use his skills to support our unique, Christ-first mission.”

O’Gwynn says it is a unique privilege to be joining NGU at such an exciting time for the university and looks forward to serving with university colleagues to strengthen its facilities and resources.

“North Greenville University is at a key point in its 125-year history, poised for expanded effectiveness in a day when the need for distinctively prepared college graduates is as great as ever,” he said. “Our bedrock commitment to higher education in a Christ-focused community is critically important for equipping servant-leaders for local, national, and global arenas.”

He will lead NGU’s advancement team, helping to connect resources with the university’s mission. He comes with three decades of experience, including over 20 years at NGU’s sister institution, Oklahoma Baptist University. Most recently, he has served at Oklahoma City University, where he worked with colleagues on a major capital campaign, including multiple million-dollar gifts. In addition, he has also served at Palm Beach Atlantic and Shorter Colleges.

“Marty is very talented in building community relationships and has represented our university well in many arenas,” said Judge Robert Henry, Oklahoma City University President. “Personally, I value him as a trusted advisor, colleague, and friend. I wish him the best in this new endeavor.”

O’Gwynn has a bachelor’s degree in journalism from Baylor University and a master’s degree in communication from Southwestern Baptist Theological Seminary.

Dr. David Whitlock, president of Oklahoma Baptist University, says the first word that comes to mind about O’Gwynn is “authentic.”

“He is genuine. He is genuinely fun to work with, genuinely interested in others, and absolutely authentic in his relationships,” Whitlock said. “NGU will be blessed by his work ethic and his commitment to Christian higher education.”

O’Gwynn’s most recent community involvement includes membership in the Rotary Club of Oklahoma City since 2012 where he served on the District 5750 International Service Committee since 2016, and as Rotaract Club Advisor since 2013. He has been a Rotarian since 2000. He also is a Class 32 graduate of Leadership Oklahoma City. He and his wife, Deborah, have been married for 32 years and have two adult sons and a daughter-in-law.

“I appreciate both his ability and his heart. Along with his strong professional track record, Marty is an exemplary Christian,” he said. “I had the privilege of being his pastor for several years. He and Deb are wonderful active members of the Body.”