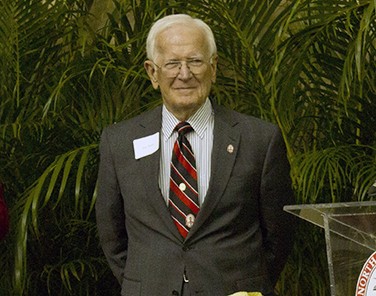 “Mr. Ward served the university so faithfully through his multiple terms on the board. He not only gave of his philanthropy, but he gave of his expertise in supporting a range of areas of the university life,” said NGU President Dr. Gene C. Fant, Jr.  “His vibrant faith, along with his keen and timely insights, has generated a legacy on campus and beyond.”

Ward grew up in the Monaghan Mill Village in Greenville, where he was the second in his family to graduate from high school. During the Korean Conflict, he served as a military policeman in the U.S. Air Force at Misawa Air Force Base, Japan. He had a long and successful career in the insurance industry, most recently as the president of Benefit Controls of the Midlands. He was previously vice president of brokerage sales for Colonial Life Insurance. He was regional vice president of Provident Life and Accident Insurance Company for more than 25 years. In addition to his career in the insurance business, Wood was active in varied civic roles. He was a member of the Indian Waters Council of the Boy Scouts, the South Carolina Law Study Committee, and the Health Insurance Association of America State Committee.

Ward served on North Greenville University’s Board of Trustees for 16 years. He initially joined the board in 1997 to fill one year of an unexpired term. He was elected to three five-year terms between 1998 and 2014. He was board chair in 2008 and vice-chair in 2001, 2002, and 2007.  During his board service, several major campus projects were approved by the trustees, including Todd Dining Hall/Tingle Student Life Center and the Ward Family Bookstore, Craft-Hemphill Missions Building, Todd Prayer Chapel, Younts Football Stadium, Hayes Christian Fine Arts Center, and the Studio at ‘Ole 414.

The NGU Alumni Association awarded Ward the Alumni Service Award in 1999, and the university conferred the honorary doctor of humanities degree on Wood at Spring 2006 Commencement. He was recognized in 2014 with the board leadership award for his unwavering patronage. He provided generous financial support for capital needs, fine arts, athletics, student life, academics, and scholarships. He was an avid golfer and has participated with his sons in nearly all of NGU’s alumni and spring golf tournaments.

Ward was an active member of the First Baptist Church of Columbia for 50 years, serving as a deacon, welcoming usher, and on several committees. At NGU, he was a member of the Christian Ministry Scholarship Fund and the Crusader Club.

The son of Louis and Jettie Ward, he was predeceased by his wife, Mary June Ward, in 2014. He is survived by his children, Kay Powers (’75),  and her husband, Mark; Linda Provence and her husband, Larry; Ken Ward (’89), and his wife, Amy Jeffcoat Ward (’90); his grandchildren, Jeremy Powers (’05), Lauren Cason (’08), Phillip Provence (’14), Aaron Provence (’07), Lea Taylor (’16), and Lyn Ward; and his great-grandchildren, Ali Powers, Kate Powers, Jack Powers, and Jax Taylor. He was predeceased by his sister, Carolyn Miller, and is survived by his brother, Kenneth Ward of Tigerville, and his sister, Myra Stowers of Winston-Salem, NC.

On Tuesday, June 8, a memorial service was at Boyce Chapel of First Baptist Church of Columbia. His interment will take place at Fort Jackson National Cemetery.